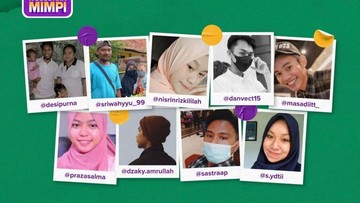 Jakarta – Dreams always have a way to be realized. Both with her own efforts, as well as help and appreciation from other parties who provide support. One example is the story of a tough woman from South Kalimantan named Sasha who succeeded in realizing her dream with the help of a mutual fund investment application for beginners, Bibit.id. Through the ups and downs of life since childhood, Sasha is still passionate about having a dream to provide a decent home for her parents. He was also moved to start saving and investing using the Routine Savings feature in the Bibit.id application. Sasha’s enthusiasm as a dream fighter received support from Bibit.id. Not stopping at Sasha, Bibit.id also continued their search throughout Indonesia to find other warriors to be closer in realizing their dreams. Bibit.id’s Product Marketing Team, Gabrielle Christie, revealed that this search is not just a story about Sasha. But it also includes our daily stories which are sometimes colored with difficulties, crushes, but also hope. According to him, this story is actually not new, but it still touches our hearts with dreams that are simple when heard, but extraordinary when they can be realized. Through the appreciation from Bibit.id, his party tries to remind people who are about to give up to stay strong and rise to realize their dreams. He describes Bibit has found various inspirational stories from dream warriors. For example, the story of Desi, a mother of two from Bali who is now one step closer to her dream of building a house and a Sanggah (temple). According to Gabrielle, Desi’s struggle to work from the village to the city with a three-hour journey made her party feel applauded for Desi. In addition, there is also the story of Wahyu and Purwedi, a family of traveling pentol sellers from Lamongan who migrated to Madura. Gabrielle said this family story reminded her that the struggle against drowsiness and fatigue is a necessity to make dreams come true. kindness and prayers of his parents. He revealed that the dream of the man who lives in Jakarta to send his parents for Umrah to the Holy Land has become even more real thanks to Bibit’s support. The method is easy, you just need to activate autodebit on the seed to get Rp. 50 thousand cashback and tell your dream so that Seed can help make it happen. “We do this as a form of appreciation to the dream warriors who are trying to make it happen by Saving Routines in Seedlings.” Gabrielle said in a written statement, Friday (12/24/2021). It is known that users can also save regularly using the Autodebit Jago feature for 6 consecutive weeks to get a cashback of Rp. 50 thousand. With Nabung Rutin, Bibit users also have the opportunity to win a series of other attractive prizes, such as the iPhone 13 pro, Apple Watch 6, mutual fund vouchers totaling Rp. 300 million, to the Mazda CX-3. Gabrielle added, any small dream can be taken for granted by For some people, it is a form of prayer and precious hope for Bibit. For that, he emphasized that every dream is worth fighting for, such as Nurul’s dream to study in Taiwan, Nisrin’s dream to have an outlet as a place to sell fried chicken, Ika’s dream, a widow who recently lost her life. her husband to continue his business in his late husband’s chicken noodle cart, Salma’s dream to buy a laptop for his sister, or Jikri’s dream to have a kebab business like his idol, Hendy Setiono. share enthusiasm and positive inspiration to the wider community in realizing dreams After all, until now, Bibit has heard more than 150 dreams directly from its users. Currently, there are at least 37 dreams that Seed has helped make come true. Interested in becoming a dream fighter that Seed helps with? You can check the details via this link. (ads) .